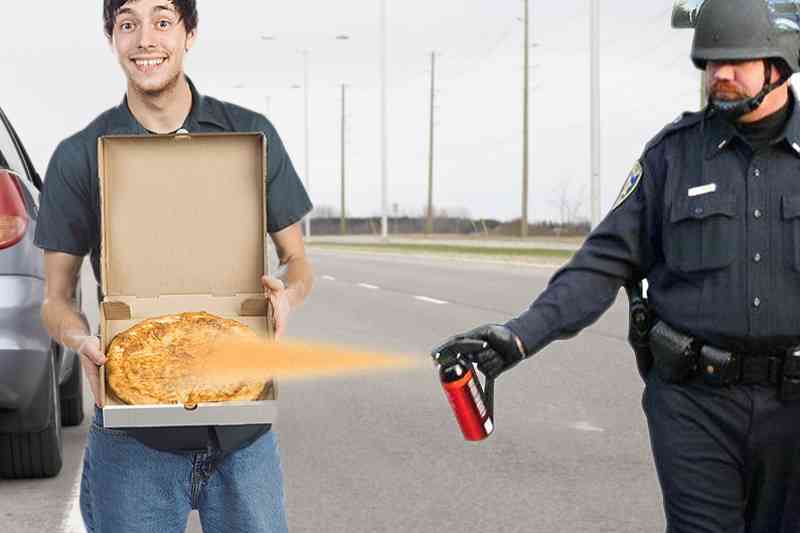 While some Missouri cops were busy killing an unarmed black teenager, brutalizing community members and threatening journalists in Ferguson, a deputy police officer on the other side of the state was feeding pizzas laced with pepper spray to prisoners at the Franklin County Jail.

The deputy, who has not been named, was originally placed on paid leave but then abruptly resigned pending a disciplinary hearing after four inmates accused him of offering them the pizza, which caused them to vomit, suffer severe mouth and stomach pains, and sent one to the hospital.

The deputy’s story has got to be one of the stupidest things I’ve ever heard, claiming an inmate stole the pizza from a janitor’s closet where he had been innocently testing pepper spray cans in a sink. I kid you not:

According to Franklin County Sheriff Gary Tolke, the guard admitted to using his pepper spray in the building but denies intentionally spraying the pizza and giving it to inmates.

“He said when he test-fired the canister in a janitor’s closet sink, he accidentally got some of the spray on the pizza that he was eating,” said Toelke.

The deputy says he allowed an inmate, Ricky Walton, into the closet to get a roll of toilet paper.

At that point, he says Walton stole the pizza.

I won’t bother asking the multiple, obvious questions that show there are more holes in his story than swiss cheese. But judging by his resignation, it’s safe to say the deputy can’t even believe what he said.

The sheriff also helpfully explained that “pepper spray is essentially a stronger version of cayenne pepper and not the chemical Mace,” a ridiculous claim we’ve been treated to before.

If anyone else had pulled this stunt, they would have been arrested and charged immediately, and if the prisoners had done this to the guard, they would have been thrown in solitary. But then again, prison guards and cops are free to abuse prisoners and citizens alike and even get preferential treatment in the eyes of the law, especially in Missouri.