At the beginning of March, New York City’s Board of Correction released a preliminary report on Rikers Island’s controversial new isolation facility, the Enhanced Supervision Housing Unit (ESHU). The $14.8 million ESHU was proposed to house 250 of Rikers’ so-called “most dangerous” inmates– a small minority of the prison population that officials claim is responsible for the majority of inmate violence.

Amid federal, state and municipal investigations and a seemingly endless stream of lawsuits alleging horrendous civil rights violations, city officials vowed to change the abusive and dysfunctional culture of the Department of Correction.

The opening of the ESHU at the beginning of this year is one of the first and only of the proposed reforms to have been implemented so far. 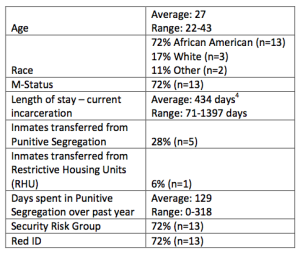 Like the rest of Rikers Island, the overwhelming majority of people confined to the ESHU are young black males: the report says that 72% are African American and the average inmate is in his mid-20’s.

Despite promises to divert mentally ill prisoners from the ESHU, 13 of the 18 inmates (72%) living there have been given an “m status.”

According to the Board, some of the people in the ESHU don’t know why they’ve been placed there or what the purpose of it is, because the DOC hasn’t told them: “It appears as though many documents are still in draft form or not being used and this is concerning because there is confusion among the inmates about why they were placed in the unit and what the unit entails.”

Inmates chosen for the ESH are supposed to receive prior notice and have access to hearings where they can learn why they’ve been placed and have an opportunity to contest the decision. Those hearings are supposed to take place within three business days of a placement decision. The Board says it knows of two inmates who haven’t had their hearing within the time frame.

The Board found that there are no posted hearing schedules. They could not tell if inmates were informed of the time or place of their hearing either, because it wasn’t on their placement notices. The Board writes that such circumstances “[called] into question whether inmates have adequate time to prepare for the hearing.”

When the Board inquired as to when the hearings were supposed to start, the DOC responded “when the Adjudication Captain arrives.”

Inmates aren’t the only ones being left in the dark about ESHU placement; the Board reported trouble trying to “adequately monitor compliance and effectiveness” of the DOC as well. In particular, the department failed to provide the board with “placement notices and other documents,” in clear violation of the rules. The Board had to demand access to documents and to the hearings from the DOC, which were not being recorded. “After much insistence,” the Board writes, “DOC began recording hearings as of March 4, 2015.”

In some cases, the offenses that landed an inmate in ESH were several years old — and although the Board doesn’t say it in the report, this one’s on them. The rules originally proposed by the Board had eliminated “owed-time,” which is the practice of placing people in solitary confinement for an offense or infraction committed long ago, sometimes at a different facility. “Owed-time” has been used to abuse inmates by lengthening the amount of time they’re kept in solitary. In fact, Rikers inmates initiated a class action lawsuit against the city over it last October. Unfortunately, the final rules adopted by the Board were amended to keep “owed-time” in place.

The Board also noticed that restrictions on visitations, mail and communication were not brought up with inmates during placement hearings. They found that such restrictions applied to inmates that didn’t have them prior to their placement in the ESH, either.

In the only bold line of the entire report, the Board writes, “Of the eight inmates known to have visit restrictions, only two had visit restrictions prior to ESH placement.” Because these restrictions were not discussed during hearings, it’s hard to tell if these inmates know why the DOC is limiting their ability to communicate with the outside world.

This is especially alarming because the Board has not yet voted on any rule changes concerning visitation. The De Blasio administration hadn’t even announced there would be revisions to the visitation policy until a week after this report came out — and even then city officials were unable to answer basic questions from reporters, deferring to whatever policies the Board chose to adopt. It is unclear why the DOC has begun implementing these policies so prematurely and without a trace of transparency or due process.

“One goal of ESH is to promote rehabilitation and good behavior through the use of programming,” the Board writes. “But the programming must exist in order for this to take place.” They found that there were “no programs aimed at rehabilitation, minimizing idleness, and addressing root causes of violence are being offered to ESH inmates.”

“The first group of inmates did not immediately receive the Inmate Handbook insert explaining the program when they were transferred,” the Board writes, “because the print shop had not sent them.”

The Board is also having trouble tracking whether inmates have access to meaningful recreation time due to incomplete logs. Some inmates have reportedly refused recreation, possibly due to bad weather in recent months. The Board notes that if this is the case, inmates should have access to a recreation space indoors. At present, “ESH inmates are escorted to a small concrete area behind the unit where there are no benches or equipment, offering little incentive to go to recreation.”

Finally, there is significant confusion among inmates about access to the law library, which is an important resource for those seeking to better understand their cases or challenge the conditions of their confinement. There is no sign-up sheet for the library and the space provided for it can only accommodate one or two inmates at a time, making it difficult to ensure equal access to those resources.

Given the substantial medical and mental health needs of inmates on Rikers Island and the DOC’s disgraceful past in delivering such care (especially to inmates in isolation), health conditions in the ESH need to be closely monitored.

The Board says that mental healthcare workers have so far been “diligent” in making their rounds each day. However, these rounds only take place late at night when inmates are “locked-in,” inside their cells. According to the Board, inmates who need to speak with someone before the night time rounds have to make “special arrangements.”

The report lays out how this has worked in practice. In February, an inmate requested a consultation take place before the evening rounds. By the time the healthcare worker arrived, the room that was supposed to be reserved for consultations was being used for inmate hearings.

According to the Board, “The mental health provider was flexible and spoke to the inmate through the gate at the unit entrance.” The report concluded that “providing therapeutic services through a metal gate severely compromises the effectiveness of such services. Mental health should be provided with a safe and private space to meet with inmates.”

The ESH also does not have a traditional sick-call. Instead, medical staff conduct rounds and visit the inmates each day. But the Board found that medical staff were not doing their rounds out of fear, because inmates were “locked-out,” outside of their cells. While perhaps understandable, it is both a violation of department policy and a serious danger to inmate health.

According to the rules, ESH inmates must be visited “at least once each day by medical staff who shall make referrals to medical and mental health services where appropriate.” The Board illustrates the seriousness of failing to do so: “It is vital that the inmates in ESH do not decompensate [experience a deterioration in mental and/or physical function], but without a medical professional making rounds and contact with the inmates, the burden of reporting a decompensating or suicidal inmate would be on the officers or inmate himself.” The Board came to a compromise with staff by allowing them to conduct rounds in the morning, while inmates were still locked-in.

Access to documentation is a big issue here, too; the Board writes that “Logs are not being kept so it is difficult for our staff to accurately report on whether sick call happened on any given day.”

There are multiple concerns raised by the Board’s report that should have been resolved before the ESHU ever started taking inmates. Many of those issues, such as those involving missing, incomplete or ‘unavailable’ records and inadequate medical care, are well-known and have been pervasive throughout the department and city jails for a long time.

With that in mind, it is absurd that the Board would permit the ESHU to open with the understanding that programming would be in place by July of this year. An ESHU without rigorous programming is just an overpriced and inherently abusive solitary unit — particularly if inmates can’t learn why they’re there or what they need to do to get out.

The Board says it can’t even tell if the ESHU is the appropriate setting for these inmates “if the inmates have not had the ability to participate in programs and reform their behavior.”

On top of everything is the counterproductive choice to not only restrict inmate visitation and communication, but to do so without the Board’s guidance and oversight, and without notifying the prisoner as to why. It is basically common knowledge that communication and in-person visitation, particularly with family members, are critical to reducing a person’s propensity for violence and recidivism. According to Prison Legal News:

Studies have consistently found that prisoners who maintain close contact with their family members while incarcerated have better post-release outcomes and lower recidivism rates.

These findings represent a body of research stretching back over 40 years. For example, according to “Explorations in Inmate-Family Relationships,” a 1972 study: “The central finding of this research is the strong and consistent positive relationship that exists between parole success and maintaining strong family ties while in prison. Only 50 percent of the ‘no contact’ inmates completed their first year on parole without being arrested, while 70 percent of those with three visitors were ‘arrest free’ during this period. In addition, the ‘loners’ were six times more likely to wind up back in prison during the first year (12 percent returned compared to 2 percent for those with three or more visitors). For all Base Expectancy levels, we found that those who maintained closer ties performed more satisfactorily on parole.”

Even as New York City plans to end solitary confinement for all inmates under the age of 21 (provided that ‘sufficient funding and programming’ be made available by 2016), the ESHU could still see a steady increase in occupants in the near-term as inmates max-out the punitive segregation limits. It’s hard to imagine this situation improving if the DOC can’t manage to provide the most fundamental aspects of the ESHU when only 18 of its 250 beds are filled.