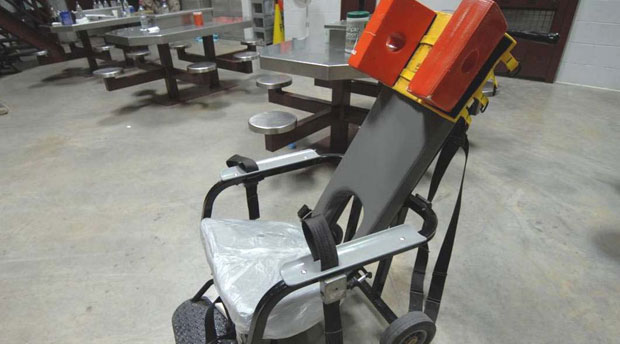 On Wednesday, the Tri-City Herald reported that Franklin County, Washington is being sued for allegedly ‘inhumane and barbaric practices’ that have put mentally ill inmates in harms way.

The suit is being brought by Columbia Legal Services, a Seattle-based legal aid organization that is working on behalf of mistreated inmates at Franklin County Jail. Lawyers allege that Franklin County is one of the worst jails in the country. The mental health needs of inmates are ignored and they are instead “chained to a fence for days, pepper-sprayed without reason, left unsupervised in restraint chairs and forced into isolation.”

One story involved a man who bit off two of his fingers while chained to a fence in the booking area. After he came back from the hospital, they chained him to the fence again. The suit also accuses the jail of “placing inmates in isolation to live in ‘degrading and deplorable’ conditions; forcing inmates to sleep on concrete floors without blankets for extended periods of time; pepper-spraying inmates, then providing no medical attention or way to clean up; unconstitutionally locking inmates down for 23 hours a day; denying inmates access to family visits, phone calls and outdoor activities.”

The Sheriff, who denies any wrongdoing, told reporters (emphasis mine):

We are doing things to keep employees safe. Unfortunately (the attorneys) are liberal and naive and think that if you just get everybody in a big group hug in jail, everybody will be fine. It doesn’t work like that.”

Some inmates have been destructive while in custody and others have tried to hurt themselves, he said. Jail staff take necessary precautions to make sure the facility is not damaged and inmates stay safe.

“We are not mistreating anybody. (The lawsuit) just goes with the territory of having a jail,” he said. “People make claims all the time. We have to take actions to protect staff and other prisoners.”

It appears that the jail is more concerned with destruction of their property and control over their inmates than making sure they are getting the treatment they need. From the reports provided by the Herald, it appears staff simply feel this kind of abuse and neglect is ‘part of jail life.’ Clearly the jail does not know what to do with them if it is chaining them to fences and more concerned about the wellbeing of his staff and his shiny, renovated jail than the mentally ill people he is holding at his prison.

The lawsuit seems to agree, noting that “jail staff regularly use the restraint chair against inmates with mental illness without providing proper mental health care or keeping them in a more appropriate setting.” One female inmate who reported suicidal and claustrophobic feelings was met with 5 days chained to a fence in a suicide smock before jail officials called for a mental health professional. It does not appear that this jail is in a position to care for the mental health needs of its population.

Which brings me to a troubling recurring theme in the treatment of mentally ill prisoners: the pervasive use of restraint chairs. Inmates are routinely confined to these chairs even when they don’t pose a threat to others or themselves, and are often left alone for long periods of times or abused further after the fact.

The Herald notes other restraint chair abuses at Franklin County:

But Franklin County is sadly not alone in its use of restraint chairs and its abuse of prisoners. In South Carolina, two inmates died in a restraint chair — one of whom had been repeatedly punched in the stomach by prison officials and banged his head on the cell wall and door. They were both “profoundly mentally ill.” The South Carolina state Law Enforcement Division denied FOI requests made by the local NBC affiliate for the jailhouse video of his murder.

In Arkansas, the Saline County Sherriff’s Office settled a civil suit in which a former inmate alleged he’d been strapped to the chair “so tight that his “whole arm was purple” and that his fingers tingled as though they’d been asleep.”

There’s really nothing more to say about this other than its an extreme failure of our justice system that these individuals are locked up and denied the treatment and dignity that is their human right.