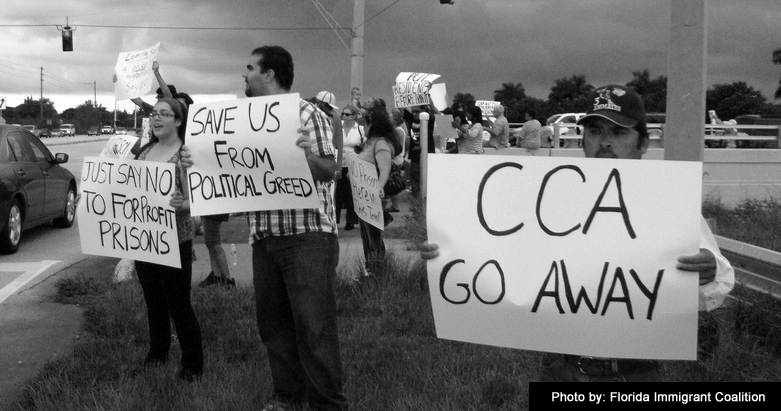 The Federal Bureau of Prisons has finally told officials at Corrections Corp. of America why they cancelled their contract at the private prison in Youngstown, Ohio. According to Youngstown Mayor John McNally, “CCA has learned that a Florida based company scored higher on a list of criteria and was awarded the next contract.”

CCA and the BOP have not disclosed any details on the evaluation upon which that decision was reportedly made, angering people on both sides of the issue.

The ‘Florida based company’ Mayor McNally is referring to would be GEO Group, CCA’s main competitor and another legendary purveyor of violence and abuse at various private prisons around the country. And Mayor McNally really should have said ‘contracts,‘ because GEO Group actually inked two contracts with the BOP to take most of the prisoners leaving NEOCC — one of which entails re-opening a prison that had been vacant since 2010.

CCA is not lying when it says it won’t share the evaluation out of “competitive reasons and a ‘long-standing relationship’ with the government.” Those competitive reasons are that if the public finds out about the abysmal conditions CCA harbored at NEOCC for so many years on the taxpayer’s dime, they open themselves up to a backlash that could put an end to their ‘long-standing [and very lucrative] relationship’ with the government, and rightfully so.

But this kind of behavior is to be expected from a multi-billion dollar corporation like CCA. Their massive profits depend on an absence of transparency, even if it means alienating employees and supporters, who are, by the way, quite angry at the moment. The Vindicator, which has been a vociferous advocate for CCA over the past few months, reacted by writing in an OpEd, “We believe that most of the people of this region have no qualms about supporting the private prison operator, but they aren’t prepared to do so blindly.”

Of course, what is far more disconcerting is the federal government’s apparent decision to favor its contracts and relationships with private prison companies over transparency and its duty to serve the public. I can see absolutely no reason why the BOP would not make this information public, other than to cover-up their complicity in allowing federal prisoners to be incarcerated in conditions so horrific they cannot be known.

If prison privatization really is the great “cost-saving” and “efficiency” solution that free market capitalists love to tell us about, why not release the evaluation and let the public — the free market — decide whether such contracts and corporations are worth our money? What do the BOP and CCA have to hide?