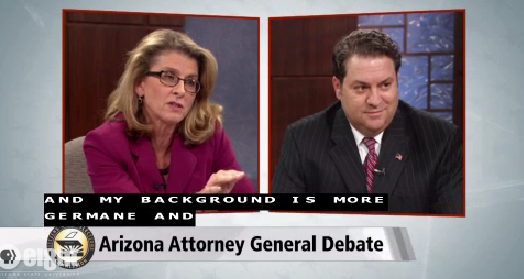 I knew Corrections Corporation of America (CCA) had a strong presence in Arizona, but until last night’s Attorney General debate, I didn’t know the extent to which it was involved in this year’s election:

The candidates also sparred over [Republican Mark] Brnovich’s lobbying on behalf of private prisons. [Democrat Felicia] Rotellini cited his efforts to kill legislation that would ban companies from bringing violent criminals into Arizona from other states.

“Mr. Brnovich can’t get around the fact that his judgment was such that for a profit, for his own economic profit, he thought it was better to kill a piece of legislation that would (block) killers, rapists, into the state of Arizona,” she said.

“I have spent most of my career putting people in prison, and yes I’ve worked for the Corrections Corporation of American to keep people there,” he said. This isn’t a partisan issue. Both Democratic and Republican governors have used private prisons in order to incarcerate individuals.”

He attacked Rotellini for taking contributions from Dennis DeConcini, who was on Corrections Corporations’ board until May.

“She’s comfortable taking money from the private prisons but now she wants to criticize Arizona for using them,” he said.

“That’s making a big assumption, that simply because I get a contribution from somebody that means I’m somehow going to be beholden to them,” Rotellini said while noting that she has thousands of contributors.

You can watch the debate from Arizona’s PBS affiliate.

Between the two of them, Brnovich is unequivocally worse on private prisons. Financial disclosures indicate Brnovich was a lobbyist for Corrections Corp. of America and “senior director of business development” at the company for about 3 years starting in 2005. During that time, he was also a prosecutor and a judge tempore in Maricopa County.

According to a statement of financial disclosure filed by Susan Brnovich on January 24, 2008, Mark Brnovich had two sources of personal compensation over the course of calendar year 2007. Those two sources of compensation were: Corrections Corporation of America and the United States Attorney’s Office.

This should raise more than a few eyebrows: a government appointee with incredible power and discretion to lock people up was also in charge of business development for a private prison company that makes its money off of… locking people up. It would be an understatement to say he is sympathetic to the industry and, more specifically, CCA.

On the other hand, while Rotellini does not appear anywhere near as involved with CCA as Brnovich, it does seem like she is taking a page from the playbook of the very donor that Brnovich mentioned.

Dennis DeConcini is a former US Senator from Arizona, whose 18-year career ended when he was accused of corruption as one of the Keating Five involved in the Savings and Loan scandal of the 1980’s and 90’s. DeConcini joined CCA’s board after he left office.

He was still on that board when Arizona was considering SB 1070 — the infamous “show your papers” anti-immigration law, which CCA and ALEC played a “played a pivotal role in conceiving, writing and naming.”

DeConcini publicly opposed the bill and testified against it in front of the US Senate Judiciary Committee, but activists were rightfully upset that he was playing both sides of the issue. The man was making money working for the company behind the law, and from the incarceration of untold numbers of black and brown people — many of whom were immigrants. Yet he was out there speaking out against the bill and making himself out to be an ally.

Grassroots Leadership, which was one of several groups to demand DeConcini resign from CCA’s board, put it more succinctly, writing, “While we’re pleased that DeConcini plans to testify against SB1070, he seems to be pandering to the immigrant community while profiting from their pain.”

This exchange from last night’s debate has me wondering: is Rotellini more or less playing the same game? Is she speaking out against private prisons while quietly taking their money? It’s apparently not even just DeConcini she’s taking money from — the Yuma Sun reports she took money from another CCA board member, Anne Mariucci, too.

I hate to say it, but Brnovich has a point. If she really is against private prisons, why not publicly denounce and return the donations?