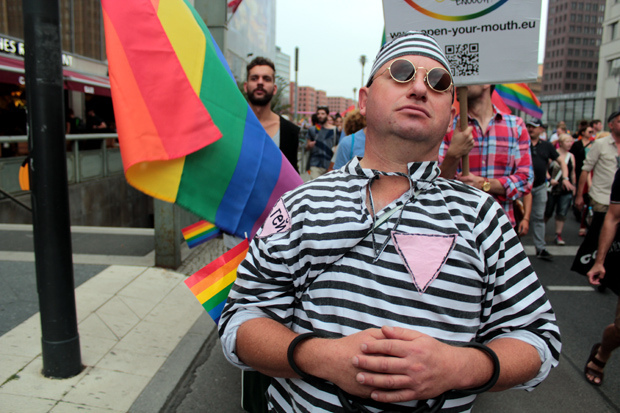 In a white male supremacist society, lesbian, gay, bisexual, transgender or queer (LGBTQ) prisoners face the compounded misery of discrimination based on their race, income, and/or sexual orientation and gender identity.

They are three times more likely to be assaulted behind bars than other prisoners, and are grossly overrepresented in our prisons — particularly our disgraceful juvenile detention centers. While only 4-8% of youth identify as LGBTQ on the outside, 13-15% of prisoners in juvenile prisons are LGBTQ.

In some jails, administrators willfully place transgender inmates with the wrong gender population — for instance, placing a transgender woman in a male population. In California, transgender women in men’s prisons were found to be 13 times more likely to be assaulted than other prisoners.

The alternative is, more often than not, protective isolation, although it’s not so much ‘protection’ as it is, I don’t know, ‘torture.’ In San Bernadino County, where LGBTQ inmates are automatically confined to the “Alternative Lifestyle Tank (ALT),” protection comes in the form of being “locked inside their cells for approximately 22 and one-half hours or more a day, regardless of their security classification.” And even though these inmates have their own, segregated pod, they’re not allowed to be out of their cells as much or in the same way as non-LGBTQ prisoners.

In one particularly enraging section of the class action lawsuit filed on behalf of LGBTQ prisoners in San Bernadino County, lawyers claim that sheriff’s deputies did not conduct legally-mandated safety checks for LGBTQ inmates “due to unwarranted dislike by SBCSD employees and an unwarranted fear of AIDS.”

LGBTQ prisoners are routinely denied basic access to “opportunities to reduce their sentences, services, programs and facilities…” They are denied recreation time, religious services, educational and work opportunities. They do not have access to drug rehabilitation programs.

As a result, they often incur longer prison sentences than inmates in general population. And what do you get when you combine (long) prison sentences with an absence of services? Higher rates of recidivism. More LGBTQ people put through the prison meat grinder. Massively destructive cycles of imprisonment and isolation that grow more powerful with each passing generation.

It’s been inspiring to watch America become decidedly more progressive on the issue of marriage equality over the past decade. But the separate, more important fight for more than mere tolerance and cosmetic acceptance of LGBTQ people — the fight for completely equal status and treatment — is not quite as advanced. I just hope that LGBTQ prisoners are not left out of the struggle when its time comes.