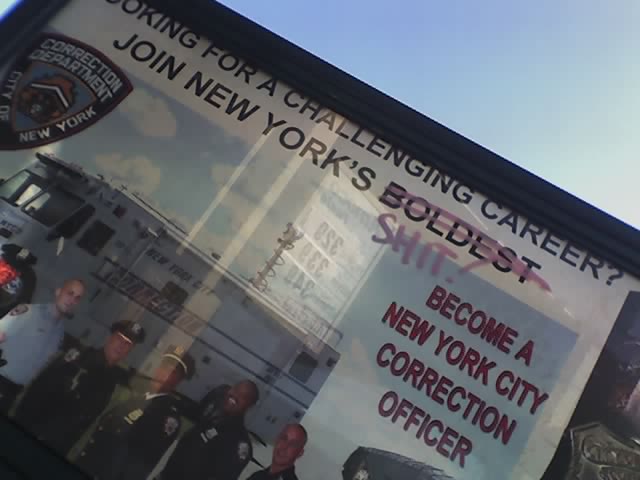 It was cathartic to see some city council members confronting Ponte over the DOC’s utter failure to protect young prisoners on Rikers Island. In discussing the case of Kaleif Browder (a 16 year old boy who was wrongfully imprisoned and spent nearly 800 days in solitary confinement) city councilman Daniel Dromm (D) told Ponte that officials “subjected this child to torture. There’s no other way to put it.”

Nonetheless, Ponte seemed to be unmoved by the gravity of the situation. He continued to parrot his weak assortment of promises to reduce violence and phase out the use of solitary for a small number of the facility’s incarcerated children. Unfortunately, the “reforms” have more holes than swiss cheese, and are so weak as to suggest they would be more accurately described as ‘damage control.’

When confronted about his promotion of two Rikers officials to top positions, despite emerging evidence that their staff routinely underreported jail fights, Ponte never once hinted he would do the reasonable thing, which would be to review his decision in light of this new information. Instead, he pretty much tried to shrug it off:

“In the attempts to really turn this agency around to make the changes, the systemic changes that really need to be made, do you really think it was appropriate to not only keep these individuals on board, but to promote them?” an incredulous Speaker Mark-Viverito asked.

“Yes,” Ponte replied, explaining that the men were experienced and had done good work, to his knowledge.

“The report that I reviewed when I promoted them was not the report you’re reading from,” Ponte replied, without admitting that the report itself was found to be inaccurate.

Clemons is now Deputy Chief, the highest ranking uniformed officer in the department, so why wasn’t he at today’s hearing?

According to Ponte, “He’s on a long-planned vacation.”

According to the NYT report on the meeting, Speaker Mark-Viverito (who apparently agrees that Ponte’s excuses are ludicrous) responded by saying, “I don’t know if that sends a positive and affirming message to us that serious changes will continue,” and called Clemons “clearly incompetent.”

Some reformer! I’m sure corrections officials and DOC employees are shaking in their boots that big bad Ponte might hold them responsible for their obscene behavior. Ponte and the rest of the DOC / Rikers leadership should have resigned in disgrace by now. But instead of taking responsibility for their crimes against children, they’ve been trying to save their asses and head off a much-needed federal inquiry.

I guess this is what a $1.7 million contract with Enron’s former corporate consultant will get you.

One thing is for sure: the city’s newly anointed ‘progressive champion,’ Mayor Bill de Blasio — who is slowly but surely morphing into Mike Bloomberg 2.0 with his sickening defenses of the city’s corrupt justice apparatus — cannot be trusted to take the lead. The fish rots from the head down, and de Blasio’s reign over NYC grows increasingly putrid each week.

Can there be a greater disrespect to the countless young victims (who have, are, and will continue to be maimed, raped, beaten and killed at Rikers while city officials twiddle their thumbs) than to tolerate this brutish system and the incompetence of the people who lead it? The only path to justice is to remove these children — and their reprehensible handlers — from the corrections system entirely and immediately.